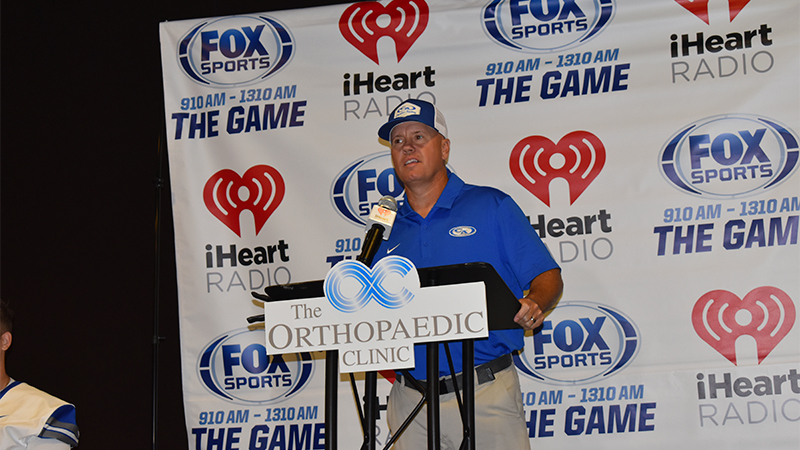 Chambers Academy will be looking to return to the state championship this year after missing it for the first time in seven years.

Head coach Jason Allen will face a younger team, but he still has a few players who can help the team regain the state title.

Allen spoke about his team at High School Football Media Days, and he was joined by linebacker Gavin Kight, lineman Levi Waldrop, lineman Jake Owen and running back Braxton Yerta.

Allen will be coaching his 19th season for Chambers Academy.

“It’s my favorite time of year,” Allen said. “A lot of people are excited about football down south, and I wouldn’t want it any other way. Chambers Academy is my alma mater and that’s where my heart is.

Allen is optimistic about his team despite losing several seniors.

“We just had our seventh straight year with 10+ wins,” Allen said. “I think we’ve stood the test of time, and that’s what you look for as a coach.”

Allen is proud of how his team showed up in summer practices.

“That’s the number one thing is that they have to show up,” Allen said. “We think that’s a recipe for what our team will look like in the fall. They believe in us and our system.

Allen also praised those around him for Chambers’ success.

“I have a great coaching staff and community,” Allen said. “If you ever go to a football game at Chambers Academy, the community shows up and they love football. I tell my kids this is one of the best times of your life and the window is closing fast. You better enjoy it because you’ll be talking about it for the rest of your life.

Allen still has high expectations for his team.

“Our goal is to win a championship, and I think that should be every team’s goal,” Allen said. “If not, why are you doing this? It’s hot and it takes time to do what we do. We have lost 18 seniors, but we are graduating players every year. I feel like we’ve done a good job of moving forward and maintaining a positive momentum.

Allen also explained how not playing in Springwood this year will affect his schedule.

“We’ve lost the Springwood rivalry now that they’re playing a different style of football,” Allen said. “It’s tough because you need a rivalry. Rivalries are good for high school sports. It hurts us to lose that, and hopefully we can get that rivalry back.

Chambers will play a game Saturday for the first time in program history.

“We’re going to play in the SECIS game at West Georgia University,” Allen said. “We are going to play First Presbyterian Day. It’s completely new to us, and we’re thrilled about it. This is something new, and I hope that we will represent our association well.

Despite losing several players last year, Allen thinks one of Chambers’ advantages is the fact that they’re able to coach players from middle school through high school.

“We run the same system until fourth grade,” Allen said. “We kind of have an idea of ​​what we get when they get to ninth grade. It was great because we didn’t have to do a lot of teaching. They say tradition never graduates.

“I’m a game action coach, and our kids are doing the same thing they did in peewee,” Allen said.

Gavin Kight knows his team is hungry to win the state championship this year.

Allen feels like his team is being overlooked, but he’s excited about it.

“Look at Auburn University. They were picked to finish seventh in the West last week,” Allen said. “As a coach, that would excite me. I know these guys are excited and hungry. Our program speaks for itself. Winning becomes a habit like losing.

Chambers will play his first match against Lee-Scott on August 18.