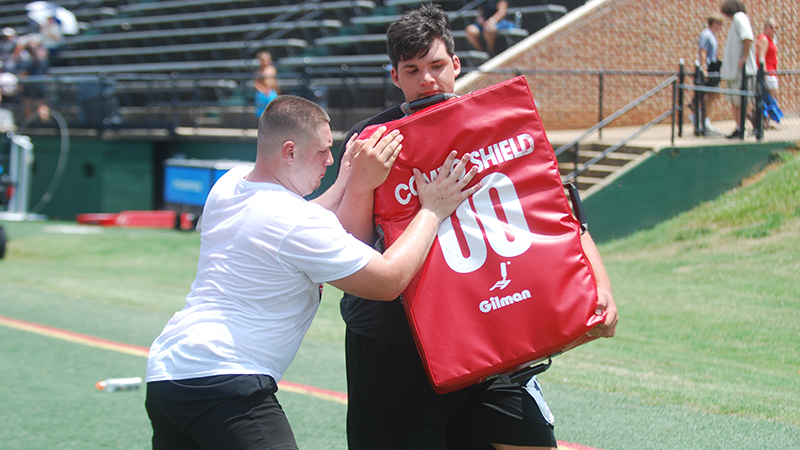 The count’s rooms offensive line/defensive linesSpecialist The football camp brought together athletes from all over to take part in a litany of practice drills on Friday.

In addition to Chambers (the LaGrange College head football coach), the camp was led by members of his staff as well as coaches from Point University and Albany State University, among others.

It wasn’t just the coaches who came from out of town, the athletes too. Adrian Martin has traveled all the way from the Louisiana bayou to participate in defensive line drills.

“I thought LaGrange would be a cool place to come and learn things that I couldn’t come back to in my state,” Martin said. “I’ve been around the South lately and learned more than any other camp I’ve been to.”

These are not small words, as Martin notably participated in the Florida State linemen’s camp.

“We’ve attracted kids from all over the Southeast and beyond,” Chambers said.

It was the first Chambers camp of the summer. Last year’s OL/DL/specialist camp brought together around thirty athletes. This year, that number has grown to about 120 athletes.

The offensive lineman focused on blocking and protecting skilled position players lining up behind them while the defensive lineman worked on their footwork and block elimination. Campers received valuable information from a multitude of different coaches during camp. By attracting so many coaches from different universities and colleges, Chambers was able to create a camp that offered a plethora of different voices to help coach athletes. Most campers have their sights set on playing football at the next level and have relished the chance to perform in front of college coaches from across the Southeast.

“This is where the football begins,” Chambers said. “You must first cultivate the d-line and the o-line.”

Skill Stations have 7-on-7 camps and a variety of other ways to find work over the summer, but the heavy hitters in the trenches are often overlooked. Chambers wanted to give guys who don’t usually go to summer camps a chance to get quality work over the summer.

It wasn’t just the lineman who got to show off his skills on Friday, the punters and kickers also worked. Chambers brought in special teams coaches to work specifically with those guys. In stark contrast to the juggernauts on the line, the special teams looked like average kids, but with pigskin on their feet they could pop the ball.

It was just the first in a series of camps that Chambers and LaGrange College plan to hold this summer. The next camp, Skill Academy, will take place on June 30 and will consist of students in grades 9-12, just like the OL/DL/Specialist camp was. The Rising Senior Recent High Graduate Camp will take place on July 6 and 7 and will include only 12th graders and freshmen. The last planned camp will take place from July 28 to 29 and will be reserved for young football players. Registration is at https://www.earlchamberscamps.com/.