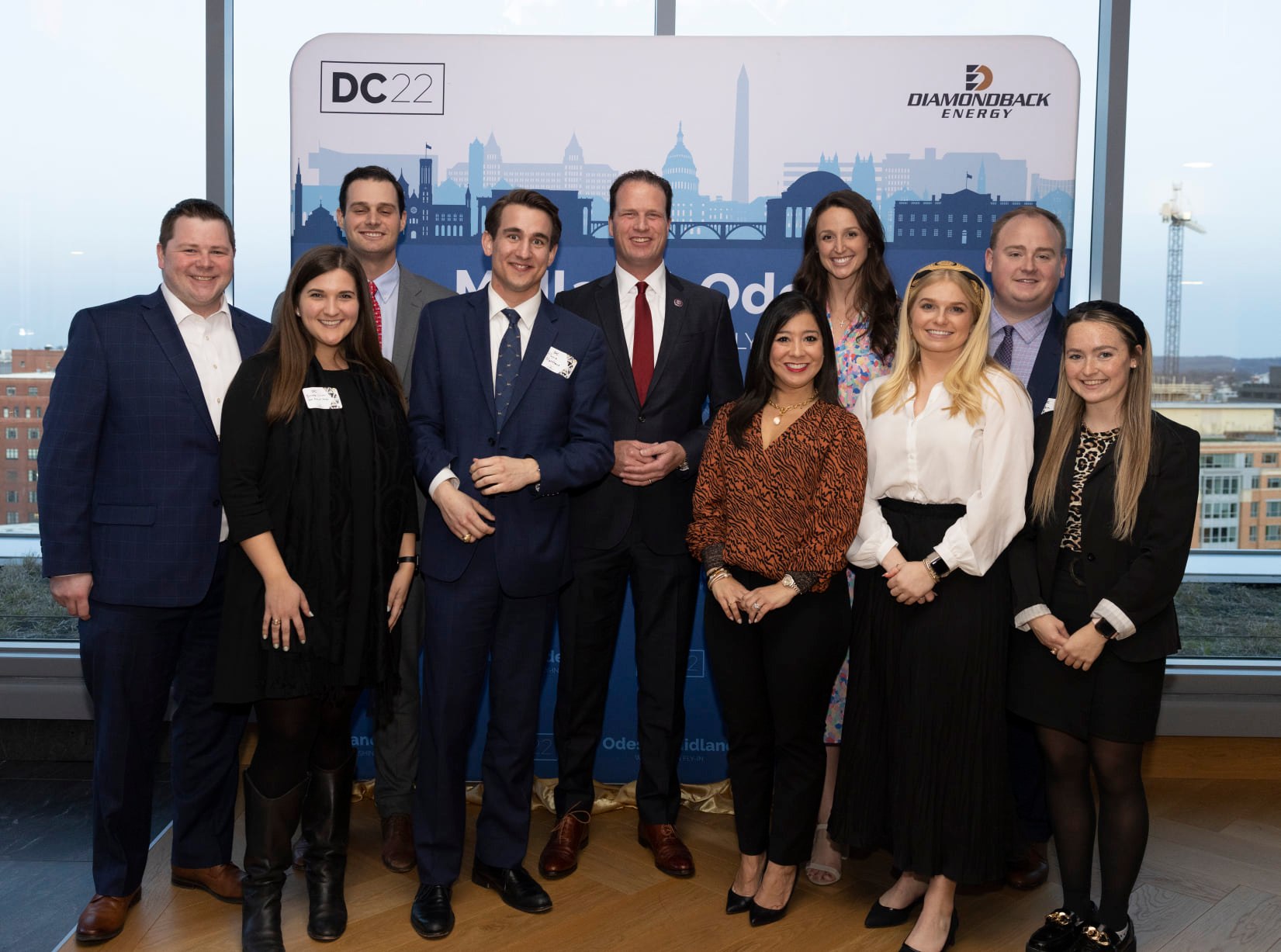 Chambers’ journey to DC to educate, advocate and tell our region’s story

Last week, the Midland and Odessa chambers held their first-ever joint DC Fly-In. The objectives were to educate, defend and tell about the charms and challenges of our region. These challenges include sustaining one of the world’s largest economies while protecting our infrastructure, ensuring public education, and supporting a balanced approach to immigration. We arrived at a time when Capitol Hill wasn’t really back to business as usual. DC is a city still reeling from the COVID-19 pandemic, the January 6 insurgency, and a war waged in Ukraine. It was no small task and together we were up to the challenge.

Once the initial Fly-In idea was approved, the teams from the Midland and Odessa chambers got to work planning. Beyond support from the Chamber, the program needed help from the business community and found it with support from Diamondback, Chevron, Pioneer and the Sewell family of companies. Sixty leaders from Midland and Odessa (including six students from UT Permian Basin) were briefed on the process and heard from political experts as well as national media professionals.

Even though most of the participants are engaged citizens and leaders in their fields, they still benefited enormously from looking behind the scenes of the workings of the Congress. Former Ambassador to Mexico Christopher Landau gave us insight into complex immigration issues. A media panel that included a former White House press secretary and current broadcast reporter who covers ‘The Hill’ shared details about how news decisions are made and encouraged us to support local media. . This is something I agree with as a daily Reporter-Telegram reader. The Washington Post will always cover what’s going on in DC, but without local news, we wouldn’t always know what’s going on at city council or school board meetings. And, of course, we heard directly from our elected officials, Congressman August Pfluger, US Senator John Cornyn and US Senator Ted Cruz.

Mark Strand of the Congressional Institute reminded us that those who work on the Hill, including many elected officials, are often generalists. Most of them, certainly those in states other than Texas, cannot explain the difference between fresh water and produced water, between tubing and casing, or understand the unique challenges that come with an entrenched economy. in the production of energy. It’s up to us to tell the story of what our community and industry needs while retaining the humanity of who we are and what we do.

What shall we do now? Continued coordinated efforts will yield the most success for this region. Each chamber has an advocacy committee that can take the initiative to establish a common agenda. Leaders and members of chambers can prioritize this agenda in their work. It’s just the beginning. We often have high level politicians who come through our “Permian Fundraising ATM”. I understand. I spent the last decade of my career fundraising. And we can all do better. Can we ask the next politician who helps boost his campaign account to spend the night in the area that helps fund his re-election?

Can we organize more than a photo op or a press conference in front of a rig, but a real meaningful visit to learn? To witness the opportunities and challenges we have at Midland ISD and Ector County ISD. To see the incredible progress of your own growth at the University of Texas Permian Basin College of Engineering. To visit the Midland International Air and Spaceport and ask Sara Harris to present the economic footprint. To witness the collaboration sparked by the Permian Strategic Partnership. We need our federal leaders to see, hear and understand both the rich innovation and the continual struggle of life in the oil patch.

The Midland and Odessa chambers have long been the organizers of this work and will continue to present ways for communities to engage and advocate. Many Chambers visit DC each year. In fact, San Antonio was there when we were there. They had 100 delegates. It’s a win we’ve had 60 in our first year and it’s proof of a combined West Texas community that wants to be more engaged.

We are better together! I hope this trip produces a more robust and coordinated effort to help our elected officials and their colleagues move beyond the sound bites and govern in a way that recognizes and elevates everything we do in West Texas. . We need your help to tell this story together. Individual citizen engagement is important. A phone call or email can make a big difference. The visit with your representatives is not a burden or an imposition but a right and a privilege. Both chambers will continue to be the conduit for this important work at the state and federal levels.

Kate Williamson is Chair of the Board of the Midland Chamber of Commerce and Executive Director of the Shepperd Leadership Institute, UTPB.

Here are some “fast facts” about the DC Fly-In:

• In all, approximately 60 West Texans and local leaders participated in the DC Fly-In.

Here are some quick highlights of the DC Fly-In route:

• Roundtable on bipartisanship, including West Texas Congressmen August Pfluger and Jodey Arrington, and others

• Discussion on the commercial space industry