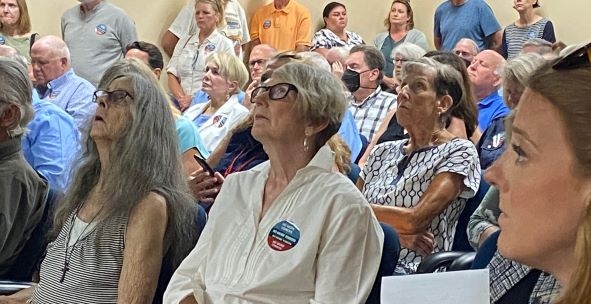 On May 24, 2022, the James S. Page Government Building was filled to capacity – not just the Commission rooms, but the entire building. The issue that was top of mind was a proposed settlement with Riverstone Properties over its plans for a 50-acre parcel on the south end of the island. A very controversial issue, which pits developers against those who want to protect and preserve the natural beauty of Amelia Island.

In this case, “the people” won. By a 3-2 vote, county commissioners voted in favor of an ordinance passed in June 2021 that reduced the maximum building height (in unincorporated areas of Amelia Island) from 85 feet to 45 feet . The passage of this ordinance (2021-08) ensured continuity of height restrictions at Fernandina Beach, but also effectively “cancelled” Riverstone’s plan to build 11 towers – two units per floor and seven stories high.

Even before the start of the meeting, nearly 100 people had registered to speak on this single agenda item. Every seat in the house was occupied and it was shoulder to shoulder along the walls. Also, the hallways outside the meeting room were filled to capacity – all available chairs were taken and those left standing paced the hallway.

Commissioner Aaron Bell, who presides, had to hammer the gavel once or twice in the commission chambers when onlookers clapped or cheered politely as a crowd is wont to do. But there was no way to silence the people in the hallway and the sound of their applause permeated the walls and was heard by all.

In accordance with established procedures for public participation in meetings, which state: “No disruptive behavior will be permitted (e.g. clapping, whistling, heckling, shouting…or any other disruptive behavior” many attendees held up signs, and virtually all speaker wore a sticker on their chest that read “NO MORE TOWERS”.

Despite the number of speakers, there does not appear to be any duplication of highlights. There were individuals talking about conservation, others about the need to protect birds, turtles and endangered species. . . the dangers posed by hurricanes and concerns about evacuation plans. . . the need for more fire and police protection. . . tree conservation, beach access and skyline preservation. To watch the meeting in its entirety, go to https://nassaufl.granicus.com/MediaPlayer.php?view_id=2&clip_id=1421&meta_id=159342

County Attorney Denise May briefly outlined the options before the Commission, as required by law. The Bert J. Harris Act, under which Riverstone Properties “claims its claim” against the county, sets a legal timetable. Based on official documents and notices presented, the county faced a deadline of June 6, 2022 to respond, which explains the sense of urgency.

Susan S. Erdeli, of law firm Marks Gray (a practice that has represented the county in the past and was named as defense counsel), then addressed the crowd, detailing her experience with the law. Bert J. Harris.

She began by describing him as “a creature of the Florida legislature. . . and is a law that only exists in Florida. . . and is aggressive enough to protect the rights of private landowners at the expense of local government. Ms Erdeli noted that she has litigated 10-15 cases in this area over the years and even defended a claim against the same law firm that represents Riverstone – and managed to win.

She described the options available to the Board of County Commissioners this way:

Confirming that these types of cases are very expensive and “the stakes are so high if you lose,” Erdeli said “you have defenses” and estimated the case could take one to four years.

Before inviting the public to comment, Commissioner Bell made this statement: “I received 51 phone calls and 507 emails opposing this by-law from my constituents and only got two in favor. It’s in my commission district. . . I cannot and will not support this settlement. My vote would be for option three where the county tells Riverstone to pound some sand and see you in court. The room erupted in loud applause.

And that was option three. Approved by a 3 to 2 vote with Commissioners Bell, Martin and Farmer seconding and Ford and Gray dissenting.

A summary of the public comment period will be published tomorrow.

Boyfriend of shooting victim Chrisian Chambers has been tried for murder