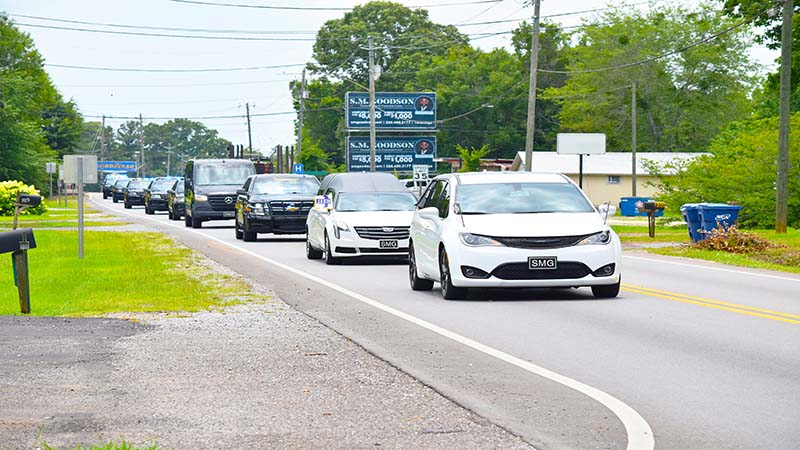 On Monday, law enforcement officers from Chambers County and across the state of Alabama, and even the state of Georgia, traveled to the small town of Munford in Talladega County, to pay final respects to the deceased Deputy Sheriff J’Mar Colin Abel.

J’Mar died when he lost control of his vehicle while assisting the Roanoke Police Department in a pursuit that continued in Chambers County.

The service was held at Kelly Springs Missionary Baptist Church with Bishop Walt Higgins officiating. The nave of the church was filled with law enforcement, mostly on the right side of the church, and family on the left side.

Higgins prayed as Abel’s family entered the church and made their way to the casket to say their final goodbyes. J’Mars’ fiancee Jasmine Gaddist couldn’t hold back her emotions and at one point had to be helped out of the church to find her composer before returning. Gaddist is pregnant with the couple’s daughter.

“I thank God for all of his family members everywhere,” Turner said. “He has so many aunts, so many uncles. He was a blessed, blessed person.

As far as thoughts go, J’Mar has been heralded as a great son, a great partner, and a well-respected deputy sheriff.

Patrol Sergeant Derick Wright, who served as J’Mar’s Field Training Officer (FTO), spoke about his first encounter with J’Mar during the interview process at the detention center.

“The first time I met Deputy Abel was during an interview with Maj. Mike Parrish and myself at the detention center, where he was applying to be a correctional officer,” Wright said. “To say he blew his interview out of the park would actually be an understatement.”

Wright explained how J’Mar excelled at everything once hired at Chambers County Jail on June 20, 2020, and on April 19, Wright said J’Mar had transferred to the sheriff’s office, where Wright’s job was to prepare J’Mar for the academy and nitpick everything he could.

“As FTO, it was my job to take it apart every day, and there was just nothing to take apart,” Wright said. “MP Abel was, in my opinion, the absolute definition of squaring. From his uniform appearance to his polished boots. When he walked into the patrol office, he just had this confidence in his appearance, in my opinion, that he had been doing this for years.

That confidence likely came from his father, Martin Abel, an Air Force veteran. Martin took a deep breath before stepping onto the podium to talk about his son, J’Mar. Martin told the mourners that J’Mar had always wanted to go into law enforcement, despite Martin’s attempts to direct him to the Air Force.

“To say he wanted to be in law enforcement is an understatement,” Martin said. “I couldn’t stop him even though I wanted him to join the Air Force. He said no. Law enforcement is where I want to go.

The bond Martin and J’Mar shared was apparent when Martin opened up about his and his son’s conversations while J’Mar was at the academy. Martin said J’Mar often called him at the Jefferson County Sheriff’s Office Department Certified Academy to fill him in on what he was learning and ask Martin for help.

“I remember when he was telling me what was going on,” Martin said. “He asked me, ‘Hey, dad. They made us shine our boots here. Can you teach me how to shine my boots? And I said to him, I said, ‘Well, it’s been a long time since I’ve shined black leather boots. But I’ll show you how.

Father and son spent several days at the range, discussing J’Mar’s career and future aspirations. Martin said there was no doubt that law enforcement was where J’Mar wanted to be, and J’Mar had his sights set on joining the United States Marshal Service.

” We talked ; we had really long conversations about his career, and that was law enforcement,” Martin said. “His next step was to go from the local level to the federal level. He asked me several times, ‘Hey, dad, what do you think? Which federal agency [do] do you think i should come in? [As] as soon as the words US Marshal came out of my mouth, he was like, this is what I want to do.

In closing, Martin asked everyone to remember that his son died a hero.

“I will miss him, I will honor him, and I ask each of you here in the church and also at home to keep in mind, just have it in yourselves that my son was a hero,” Martin said. “He died a hero, he died doing what he loved, that’s all I asked you when you start memorizing and having it in your memories about Jamar, I don’t wish that to no father. You should not bury your child.

Chambers County Sheriff Sid Lockhart took a moment to thank everyone who took the time to attend the service and explained how amazed he was at the outpouring of support, not just from Chambers County and the state of Alabama. Lockhart said he received calls, cards and gifts from all over the United States.

After the church service, the procession headed a few hundred yards to Kelly Springs Memorial Gardens, where J’Mar received full police honors. As the family and all law enforcement members present gathered near a tent, a lone bugler played tap dancing as members of the Lee County Honor Guard gave a 21-gun salute to J’Mar of cannon. This was followed by the handing over of the American flag that draped the casket to the surviving family members. Shortly after, from the speaker of a Chambers County Patrol SUV, Chambers County Communications Supervisor Darlene Billingsley was heard calling J’Mar’s end of shift.