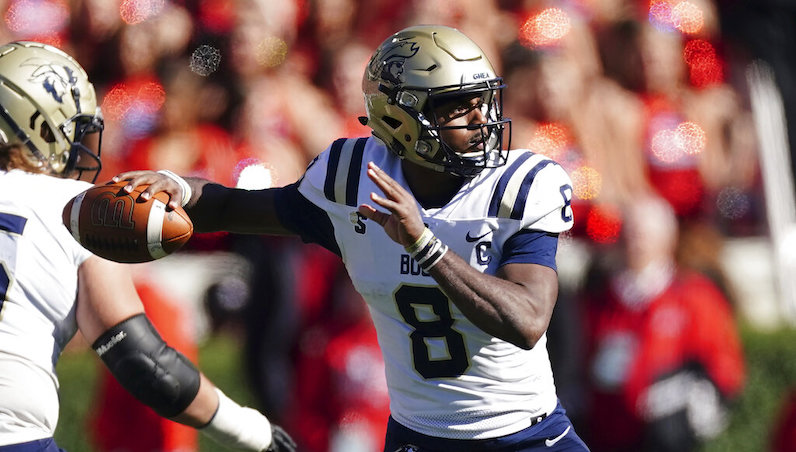 Charleston Southern quarterback Jack Chambers (8) throws a pass in the second half of an NCAA college football game against Georgia on Saturday November 20, 2021 in Athens, Georgia. (AP Photo/John Bazemore)

Jack Chambers is the newest member of NC State’s football program. In a sneaky, low-key addition from Dave Doeren, the Wolfpack landed Chambers, a multi-year starter at Charleston Southern quarterback.

NC State has landed a transfer commitment from Charleston Southern quarterback Jack Chambers, who is admitted to the school and is expected to enroll in summer school. https://t.co/691jeye8K2

During the 2021 season, the 5-foot-10 Chambers completed 55% of his passing attempts: 2,510 passing yards, 17 touchdowns and 10 interceptions. Chambers has 40 career touchdown passes to his name.

Additionally, Chambers led the Buccaneers in the 2021 season with rushing for 477 yards and seven touchdowns.

In September 2021, Chambers was brilliant as he nearly led Charleston Southern to an upset on the road to Eastern Carolina. In the end, the Pirates prevailed, 31-28; however, Chambers threw for 405 yards and two touchdowns. Chambers also ran for a touchdown.

Currently, Chambers is enrolled at NC State as a walk-on. He will bring depth behind Leary, with redshirt rookie Ben Finley. Incoming 2022 freshman quarterback MJ Morris will also join the mix.

NC State personnel can also find ways to involve Chambers as a situational player on offense: different packages and formations.

Earlier this offseason, Aaron McLaughlin, a 4-star prospect in the 2021 recruiting class, was traded out of NC State. McLaughlin is now with Jacksonville State.