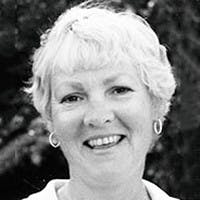 Bach, Kay Chambers Age 88 of Edina, died June 30, 2022. She was the daughter of Katherine Noth and Robert Chambers. She was born on May 19, 1934. After her mother and father divorced, she became especially close to her maternal grandparents, Henry and Nellie Noth. Kay was born in Illinois but moved to south Minneapolis as a child. She graduated from Washburn High School in Minneapolis and attended the University of Minnesota for two years. She married her neighborhood boyfriend “Ronnie” on June 18, 1955. Growing up, Kay loved dogs and horses. Because her husband was an avid hunter, the family included (very spoiled) hunting dogs. She also loved horses. Family vacations almost always involved horseback riding. Kay (and her daughters) managed to convince Ron to buy four horses when he invested in farm property. The horses enjoyed their freedom during the week on 180 acres so much that we often couldn’t catch them. We eventually moved the horses to the cities and boarded them at Eden Prairie so that Kay and “the kids” could ride frequently. Kay and Ron shared a passion for golf and joined the Hazeltine National Golf Club in the 1970s. Both Kay and Ron have been active on many committees including a number of US Opens, a few PGAs, the Ryder Cup and other national tournaments. Kay and Ron traveled frequently, often to visit friends and play golf. Kay loved the outdoors, especially the North Shore and birdwatching and feeding – her personal favorite, the Cardinal. Kay was an active volunteer and held many positions. She was president of the League of Women Voters of Edina. She has been an active volunteer/member of LWV-Edina for 54 years. In 1980, she chaired the Edina Foundation’s highly successful Edinamite fundraiser, which continued to raise funds for the foundation for the next decade. Kay and her friend Betty Hemstad presided over Edina’s multi-faceted and highly successful centenary celebration in 1988. They managed 40 commissioners who planned unique monthly activities. The hugely popular 4th of July Edina Parade was launched as one of the monthly centenary events. In 2019, she and Betty were honored as two of the grand marshals in the lead parade car. Other notable volunteer efforts include: Edina Senior Center, Edina Kelodale Garden Club, Edina Historical Society, Edina Senior Advisory Council. She was an election judge for many years. She even started the first Edina recycling program located at Jerry’s grocery store. She brought her community advocacy to her position on the board of Edina Marquette Bank. Kay was passionate about music and theater and supported many arts organizations through donations and ticket purchases. His schedule was always packed with performances at the MN Orchestra, MN Opera, Schubert Club, Ordway, Park Square Theatre, Penumbra, Bloomington Theatre, and more. She loved all kinds of arts, theater and music and was definitely a Debbie Duncan groupie! Kay had a wide circle of friends whom she met through her various volunteer and artistic activities. Her first group of friends, the “Gang of 8” whom she met in elementary school and who have maintained their strong bond to this day. Kay was predeceased by her husband, Ron; his sister, Sue (Trehus); and his mother Katherine Noth Chambers. She is survived by her daughters, Loren Bach (Dave Martus), Micah Bach Kinder (Jim) and Debi Bach McConnell (Don); grandchildren, Ian Bach-Dowd (Veronica), Jordan Bach, Aidan McConnell, Riley McConnell; great-grandchildren, Jacob and Natalia Bach-Dowd. Memorials are appreciated for Planned Parenthood, League of Women Voters of Edina, TPT/PBS TV Station, Edina Kelodale Garden Club, Penumbra Theater or any arts organization you prefer. Services will be held at the Lakewood Cemetery Memorial Chapel, 3600 Hennepin Aveune, Minneapolis, on Monday, August 8 at 1 p.m. A reception will follow. We kindly ask all participants to wear masks. There will also be a live streaming option. The link to view the live stream will be available at: Washburn-McReavy.com Edina Chapel 952-920-3996

Who’s Next finale: Kyle Chambers is ‘ready to go to hell and back’ against Izaak Michell