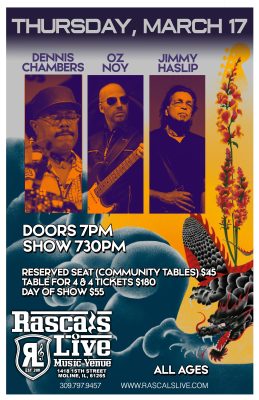 The many accolades and associated acts of this trio are worldly impressive and far too numerous to do justice toeach of these virtuoso musicians. Please honor your musical soul and visit each of their websites.In short, Oz Noy won the highly acclaimed Guitarist magazine’s reader poll for “Best Guitar Riff on arecord” (2007), “Best New Talent” (2008) and “Best Guitarist” (2013). He played with along list of high-level acts; Sting, Chris Botti, Phoebe Snow, Don Henley, Allman Brothers…again and again.

Jimmy Haslip, founding member of the Yellowjackets, twice GRAMMY winners, was nominated forseventeen GRAMMYs. Jimmy was also nominated for a Edison price in 2000 and more GRAMMYappointments since.Played with an impressive list of musicians; Al Jarreau, Gino Vanelli, Bruce Hornsby, Allan Holdsworth,Donald Fagan Marilyn Scott, Eric Marienthal, Chris Botti, Dave Koz, Herb Albert, Lee Ritenour, LeRippingtons, Diana Ross, Rod Stewart, Steely Dan, Kiss, Crosby Stills and Nash plus too many other icons tolisting! He plays a left-handed bass guitar, he strings it upside down – in other words, his low B string is physicallylower than its high C. Add to that its phenomenal fast soloing ability, and your brain ends uptied.

Dennis Chambers, world famous funk drummer has been inducted into the Modern Drummer Hall of fame in 2001.Chambers received a Honorary Doctor of Music from Berklee College of Music in 2004.Well known to drummers for his impressive technique and speed. Chambers is particularly appreciated forhis ability to play “in the pocket” but can also stretch very far from the pocket, which is also a feature of histechnical. Chambers exhibits a powerful style that is technically proficient, yet highly musical andgroove oriented. He is best known for his fast hands and triplets on the bass drum. He can play in a widevariety of musical genres, but is perhaps most notable for its jazz-fusion, funk and Latin music playing.Chambers’ talented diversity is enhanced by his highly respected catalog of artists he has recorded andperformed with: Tommy Coster, John Scofield, George Duke, Victor Wooten, Brecker Brothers, CarlosSantana, Parliament/Funkadelic, John McLaughlin, Mike Stern, Tower of Power, Maceo Parker, Steely Danand many other iconic artists.

Through it all, Oz Noy’s guitar is the common thread. Whether leading the group with an incisive and austere pacework or soar through the grooves with flawless single-note leads reminiscent of graceful, nuanced inflectionfrom a fine soul singer, Noy walks brilliantly on a musical tightrope covering the best of the past and the future.Surprising, danceable and accessible, Who Gives a Funk is a powerfully heartfelt new statement from one ofgreat contemporary guitar improvisers. Listening to this on CD is amazing, seeing this show live ismemorable.

Rascals Live is centrally located in the Quad-Cities with easy access from I-80 and I-74. Our hostsaccomplished artists and bands from national, regional and local levels. We are proud to present the state of theart sound and light systems that intensify and amplify the concert experience. Our music community andconcert-goers recognize and appreciate the intimate setting of the hall and the raised stage whichprovides optimal vision from all seats. Rascals Live has earned its success by continually researchingand featuring various genres of music. Our fanbase can trust that musical talent Rascals Livehas provided in the past will continue to be promoted in the future.

Sean Leary is a writer, director, artist, musician, producer, and entrepreneur who has been writing professionally since he started at age 11 in the pages of the Comics Buyers Guide. A graduate with honors from the master’s program at the University of Southern California, he has written more than 50 books, including the best-selling books The Arimathean, Every Number is Lucky to Someone and We Are All Characters.

What are the benefits of getting mortgage advice? – Forbes UK Advisor