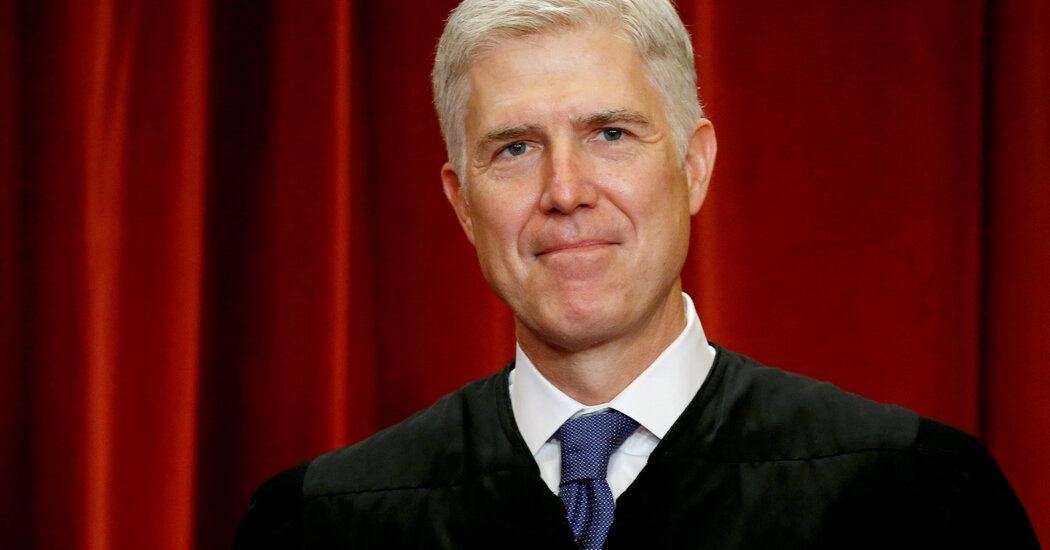 David Leonhardt (The Morning, January 16) correctly describes Justice Neil Gorsuch’s mask-free appearance during the Supreme Court hearing on vaccination warrants as “risky and dismissive of his colleagues.” As Mr. Leonhardt notes, the court requested that all reporters and lawyers appearing in the courtroom wear medical masks.

Judge Gorsuch’s action is also a public display of bias: he wore his opinion on his sleeve. His appearance without a mask during a hearing on warrants — in this case, vaccines, but similar issues have arisen around mask warrants — does not respect the notion of impartial justice. By his action, Judge Gorsuch announced that he was unwilling to listen to other views, in which case he should have disqualified himself from ruling on a case involving warrants.

At the very least, he should have remained in chambers and Judge Sonia Sotomayor, who participated remotely due to her diabetes, should have been given the opportunity to appear in person at the hearing.

I’m disappointed in Judge Neil Gorsuch. Although I don’t agree with the way he was placed on the pitch or with his conservative ideology, I previously considered him to be a man of integrity. This belief was challenged by his apparent disregard for his family’s feelings at work.

Judge Gorsuch should wear a medical mask at work out of kindness and respect for his colleagues.

How to best ease the crisis in Afghanistan

Regarding “The United States must work with the Taliban”, by Laurel Miller (Opinion guest essay, January 12):

Ms. Miller presents US foreign policy as “allowing the collapse” of Afghanistan or “working with the Taliban”, and advocates the latter. It perpetuates the myth that these are the only two choices we have.

It’s not true. What the United States needs is a more nuanced foreign policy. Such a policy would hit Taliban leaders where it hurts most, including listing known drug lords and terrorists among the Taliban leadership on Interpol’s list and freezing their personal bank accounts overseas. It would also work closely with our allies and international organizations to provide Afghanistan with much-needed humanitarian and development assistance.

It is the perpetuation of this irresponsible myth in DC political circles that will expose how little influence the United States has left and seal the fate of 20 years of American investment in Afghanistan.

Laurel Miller’s guest essay is a relevant and realistic assessment of the dire situation in Afghanistan. He appeals for immediate economic assistance from the United States to alleviate the threats of famine and chaos facing the Afghan people.

Although Ms. Miller does not have much hope that the Taliban will engage in negotiations that may change the fundamentals of their religious and political beliefs, it should be possible to obtain assurances on operational issues. US release of blocked funds and direct financial aid should be used to secure agreement from the Taliban on full access for aid organizations to provide food and health care to all Afghans, as well as enforceable assurances allowing Afghans to obtain visas for travel.

The United States failed to secure basic humanitarian agreements with the Taliban before their withdrawal in August 2021. This should not fail again.

Edward A. Friedman
Hoboken, New Jersey
The writer was director of a US Agency for International Development program to establish an engineering school at Kabul University in Afghanistan.

At this point, the Taliban only needs money. They now own the land. Economic pressure is the only tool we have to prevent Afghanistan from becoming a safe haven for terrorism. It is also the only remaining tool for the emigration of our Afghan allies left behind.

We tried Ms. Miller’s solution for two decades. We printed money that went straight into the hands of corrupt politicians, drug traffickers and, sadly, the Taliban. Concession-first diplomacy has not and will not affect US interests in Afghanistan.

Andrew Darlington
Miami
The author is a Purple Heart recipient who served two deployments with the Marine Corps in Helmand Province.

“Toxic masculinity has taken on an insidious new form”, by Alex McElroy (opinion guest essay, January 15), is important and compelling as far as it goes. But as a psychiatrist who always considers the past important, I would add that to correct this toxic masculinity, you have to start with childhood.

Cultural values ​​are also important to address, especially those that overvalue the macho man. Once a better foundation is laid, it will be easier to carry into adulthood.