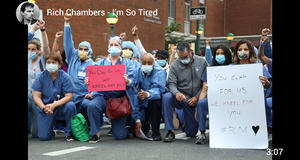 VANCOUVER, BC, December 29, 2021 / 24-7PressRelease / – Rich Chambers has won a prestigious Merit Award in the Best Short Film Competition. The award went to Chambers ‘impactful and socially conscious music video,’I am so tired. ‘

â€œWith ‘I’m so tired,’â€ says Chambers, â€œI tapped into every corner of social media and married it to my original, angst-motivated rocker to capture the essence of fatigue and the frustration many of us feel in these unprecedented times.I am more than excited to see that the social comment I put in the video resonated and was recognized by Best Shorts!

The Best Short Films competition rewards film, television, videography and new media professionals who demonstrate exceptional achievements in craftsmanship and creativity, and those who produce remarkable entertainment or contribute to change deep social. Entries are judged by highly qualified professionals from the film and television industry. Information on the best short films and a list of recent winners can be found at www.BestShorts.net.

By winning an award for best short film, Chambers joins the ranks of other high-level winners of this internationally renowned award, notably Oscar winner M. Hublot by Laurent Witz from Luxembourg, Doug Roland, Oscar nominee 2021 for the Short film Feeling Through, Disney Interactive for Vinlymation: A Love Story and many others. Rick Prickett, who chairs The Best Shorts Competition, said of the latest winners: â€œThe best short film is not an easy prize to win. Applications are received from all over the world, from powerful companies and remarkable new talent. The best shorts contest helps set the standard for craftsmanship and creativity. The judges were satisfied with the exceptional quality of the entries. The goal of Best Shorts is to help winners get the recognition they deserve.

Rich Chambers’ “I’m So Tired”, which has won accolades at more than a dozen film festivals over the past nine months, certainly deserves the award for best short film.