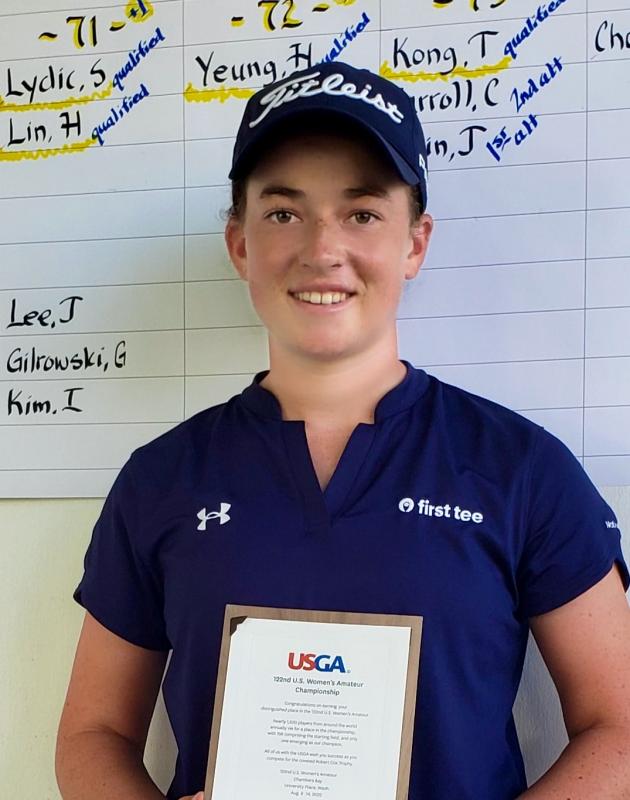 It’s a great accomplishment, especially for someone who just finished grade 10.

The 2021 DIAA State Golf Champion from Sussex Academy qualified for the event with a tie on points for first place in a qualifying round held on July 13 at Kenwood Golf & Country Club in Bethesda, Maryland.

“It was all so far back,” Lydic said recently. “One of the par 3s was 197 yards. I used my 3 wood and my ball ended up 10 feet from the pin. Hitting your shots in the right places was a necessity. You can’t force it, especially on the hardest holes.

Lydic said most of the competitors were playing at the college level. USGA entry rules for the female amateur also allow no more than a 5.4 Handicap Rating, but as Lydic said, “You have to play so much better than that.”

She said she didn’t know what her own handicap was – +3.0 as of July 26, according to the DSGA – but noted that her scoring average had fallen into even/below par territory in recent weeks.

Lydic’s performance at the North and South Junior Championship in Pinehurst, North Carolina the week before Kenwood qualified was also timely. Her under-six total in the 54-hole tournament earned her a second-place finish and a chat with Kim Lewellen, the coach of the Wake Forest University women’s golf team.

“Coach Kim was watching me, and so was her husband,” Lydic said. Shortly after, the coach told Sarah that she wanted to offer him to play for Wake Forest.

“I told him there wasn’t much to think about. I couldn’t be happier playing there,” Lydic said.

The Wake Forest connection was already strong. Sarah and Hannah Lydic both attended golf camps years ago, including a camp with the coach. Sarah said she liked the place.

Additionally, their late grandfather, Richard “Kent” Lydic, was a Wake Forest golf fan and a big supporter of their accomplishments. “He must be smiling,” their father Garrett said.

Congratulations to Deb Ronemus for her hole-in-one on the 17the hole at The Rookery on July 20. She used her Cobra 5 hybrid and a Bridgestone e12 golf ball for the 103-yard shot. Linda Welch, Kelly Barber and Jane Kuhfuss witnessed the ace.

Ronemus has already won ninth and 15th from The Rookerye holes, so betting against her on a par 3 is probably not a good idea.

Congratulations to John Riley of Wilmington for his book awards for his biography of one of the best professional golfers to ever come from Delaware.

“How He Played the Game: Ed ‘Porky’ Oliver and Golf’s Greatest Generation” won first place in the Delaware Press Association’s nonfiction book category in March. This victory qualified Riley for the national competition organized by the National Federation of Women in the Press. The NFPW also gave Riley the top spot among nonfiction books for 2022.

Riley said: “It has been an honor to work with the Oliver family and the Ed Oliver Golf Club to tell Porky’s story and thrilling to see the book recognized locally and nationally.”

I recommended the book in my February 4 column.

The Long Neck Sunrise Rotary Club held its annual fundraiser on June 20 at the Peninsula Golf & Country Club. Revenue from entry fees and sponsorships exceeded plan, with the total of $36,000 exceeding the previous year’s amount by $8,000.