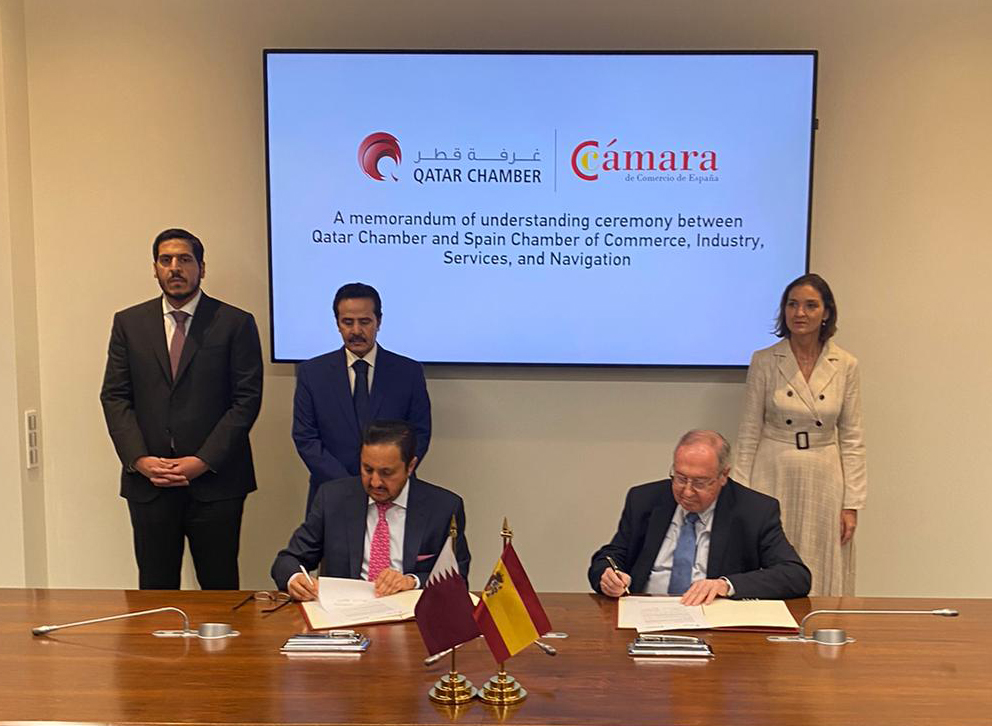 Minister of Commerce and Industry, HE Sheikh Mohammed bin Hamad bin Qassim Al Thani attends the signing of a Memorandum of Understanding between the Qatar Chamber and the Spanish Chamber of Commerce.

The agreements were signed by the Chairman of QC, Sheikh Khalifa bin Jassim Al Thani, in the presence of the Minister of Trade and Industry, HE Sheikh Mohammed bin Hamad bin Qassim Al Abdullah Al Thani, and the Spanish Minister of Trade, Industry and Tourism, Reyes Maroto.

Speaking to the Qatar-Spain Business Forum, Sheikh Khalifa bin Jassim Al Thani said that the State of Qatar and Spain enjoy close relations at all levels, especially on economic and commercial aspects, noting that their Bilateral trade had reached $1.2 billion last year compared to $820 million in 2020, an increase of 46%.

He also highlighted the chamber’s support for the creation of business partnerships, which lead to establishing more joint investments, whether in Qatar or Spain.

There are around 50 Spanish companies operating in Qatar in various sectors such as trade, contracting, services, furniture and consultancy.

“Spain is one of the most important destinations for Qatari investment. Qatar invests heavily in Spain and has many successful investments in many sectors such as real estate, financial services and energy,” he said.

The Speaker of the Chamber also indicated that the Qatari market welcomes more Spanish companies willing to invest in Qatar, saying that Qatar offers world-class infrastructure, an attractive legislative framework and numerous investment opportunities in all areas. sectors. “The Qatari market is promising and attractive.

There are a multitude of sectors in which Spanish companies can invest and benefit from the incentives offered by Law No. 1 of 2019, regulating the investment of non-Qatari capital in economic activity,” said Sheikh Khalifa.

It also allows the non-Qatari investor to import equipment needed to establish, operate and develop their investment project and provides exemption from income tax and customs duties on imports of machinery and equipment. equipment necessary for their establishment.

Sheikh Khalifa invited Spanish companies to invest in Qatar, which offers significant foreign investment opportunities in sectors such as food security, education, health, tourism, sports, infrastructure and logistics, as well as other opportunities offered by economy, logistics and gratuity. areas.