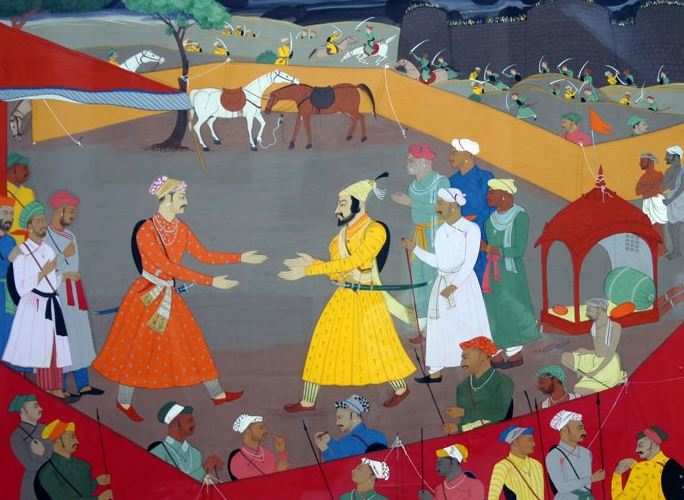 The writing of the medieval history of India fits into two perspectives: the liberal left perspective centered on the Mughals and the perspective centered on the right maratha. Many liberal arts departments in both West Indian and public Indian universities are sympathetic to Nehruvian thought and prefer the former, while many local universities and right-wing popular culture (including Bollywood) often follow the latter. The Mughal-centric left-liberal perspective is exemplified by authors such as Richard Eaton, Harbans Mukhia, and Professor Audrey Truschke. The right-wing perspective centered on Maratha is exemplified by Sanjeev Sanyal, Manoshi Sinha, Ashutosh Gowariker, etc. However, in the process of establishing narratives in favor of either perspective, both ecosystems selectively invoke the Rajputs to advance their arguments without any qualification. Ironically, the two sides are united in much more than this phenomenon. Their superficial and widespread use of Rajputs for their respective speeches is as pronounced as their contempt for Rajput voices or scholars with expertise in Rajput history. As a result, Rajput history, and history as a whole, is vandalized by both.

This is exactly what Professor Audrey Truschke did in a recent article, when she stated in general terms that Rajputs considered Shivaji to be rude and low caste. According to his school of thought, the Rajputs were closer to the Mughals than to the Marathas. Even a quick glance at the history of medieval India would suffice to inform that there probably never was a static and uniform Rajput political entity or interest. Therefore, the commonly used expression Rajput-Mughal alliance is a deeply mistaken name. Different Rajput entities had different relationships with the same powers and these relationships were constantly changing. A Rajput state viewed the prosperity and defense of its citizens as its guiding goals, while the Rajput bhaicharas were a group of Republican relatives who lived on the borders of these states. Even the “Rajput” states differed in many ways – geography, resources, demography, domestic politics, and so on.

For example, Mewar barely maintained a warm relationship with Mughal-Delhi even after the 1616 treaty signed by Maharana Amar Singh and Emperor Jehangir. This was due to their own history of past hegemony. Nestled in hilly terrain, Mewar was rich in minerals and agriculture. Zinc mining alone dates back to the time of Shiladitya Guhilot of the Samoli inscription (634 CE). Others, like the arid region of Marwar, hailed the prospects for peace and prosperity promised by Akbar, to lead a 40-year rebellion during the Aurangzeb era. The Bundelkhand states followed a similar political trajectory, often rebelling and shaking the roots of empire when their interests were threatened. However, Rajput entities far from Delhi, be it West Punjab, Kutch, Sindh or Purvanchal, Baghelkhand, Chhattisgarh and Gaharwal remained at the borders of the Mughal state. The state of Jaipur and its auxiliaries, which included Karauli, Bundi, Kota and the Hill States – all close to Delhi – followed a pragmatic policy of allegiance to Imperial Delhi, which they maintained as long as the internal interests aligned.

Therefore, particular states, and not the Rajput community, pledged allegiance to the Mughal Empire. Moreover, this allegiance has never been unconditional, yet we find general statements about the Rajputs without being qualified by time and space. For example, Jehangir – whose life was saved by a Rajput, Anup Singh Bargujar – was also responsible for the slaughter of thousands of Chauhan Rajputs from Kalpi-Kannauj. The Mughal state has often survived thanks to a simple policy: to use friendly Rajputs against rebel Afghans and loyal Afghans against rebel Rajputs.

Likewise, there is little truth to the right-wing narrative of the Mughal colonialists and the Maratha saviors. North India (including the Rajput states) was ravaged by the Maratha Confederacy, which looted and sacked towns from Punjab to Bengal. However, there remained a deeper historical semblance between the Rajputs and the Marathas as a community. The Maratha states of Gwalior, Indore and Dhar heavily recruited local Rajputs, who were the largest community in these regions, and these states inherited the legacy left by the ancient Rajput dynasties. Indeed, many Rajputs who migrated from Khandesh to Deccan were absorbed by the Maratha community. Nikumbh Rajputs became Nikam Marathas, Jadaun Rajputs became Jadhavs, and Chauhan Rajputs became Chavan Marathas, etc.

When Shivaji was defeated in 1665 by Jai Singh I at Purandar, the ruler Rajput reestablished Shivaji, which was a continuation of Kachwaha’s policy of re-establishing the defeated Hindu rulers under the Mughal state. He brought Shivaji to the Agra court, negotiated a pardon for him, and helped him become a mansabdar. Jai Singh’s son, Ram Singh, was instrumental in Shivaji’s escape from Aurangzeb’s grip. Without entering into the debate around the genealogy of Shivaji, the fact remains that his descendants and the Guhilot descendants of Mewar treat each other as brothers.

The superficial or dismissive approach taken by the liberal left in India towards any non-Mughal entity, and the confidence with which generalized statements are made, have unfortunately been adopted by their Western counterparts as well. In the name of the defense of the Mughal emperors, the living communities (Rajputs and Marathas) are pitted against each other, by those with limited and stereotypical understanding.

Similar weak Western theories have led to modern conflicts between Indian communities like the current Goojar-Rajput conflict over the identity of various Rajput rulers. Dirk Kollf, Cynthia Talbot, Richard Eaton have repeatedly pushed fragile accounts according to which the Rajputs appeared in the 15th and 16th centuries and that they are the descendants of the Brahmins, Jats, Goojars, Ahirs. None of these claims stand up to the test of close scrutiny. On the other hand, they reveal the sketchy understanding that these authors have of Rajput history. Ironically and rather alarmingly, these accounts directly complement the Sanskritization project of RSS and unfortunately fuel the modern violent claims of marginal and extremist Gujjar, Jat and Ahir groups on historical Rajput figures.

The opinions expressed above are those of the author.